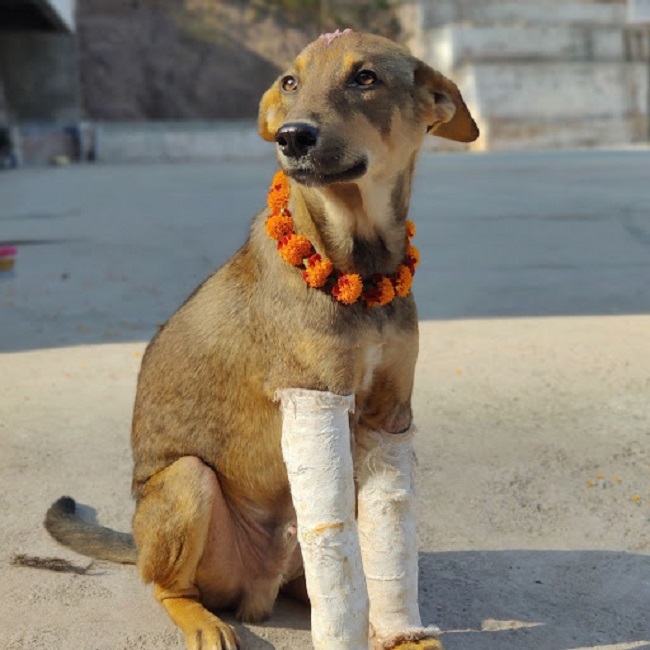 It was a normal, usual, beautiful day. Bantu only 10 odd months old was enjoying a nap on the big retaining wall near the academic block. Shera is his senior and Guru, Father and friend rolled in one. Just imagine, how many of us can ever hope to ply all these diverse and demanding roles so effortlessly.

Suddenly there was a shrieking cry of anguish. Bantu was howling in pain. He had fallen down from the big wall and had suffered a fracture on his forelegs. He was driven to the local vet immediately and came back heavily plastered. It was inconceivable how he would sit/lie/ eat/go to relieve himself.

The harsh Himachal winter had set in. It was extremely cold at night. Bantu could not be left to sleep in the open. The cold would kill him. He could not be accommodated inside since he could not relieve himself. Everyone at the school gave up on him and thought his days were numbered. This thought was very distressing, to say the least. It is like seeing your own baby slowly slipping into the jaws of death. But little did we know that Bantu’s will to survive was mightier than our fears. Within three or four days, he struggled to roll over and stand. Though the doctors had advised him not to stand, how to tell that to a young dog? He started dragging himself to attend to nature's call. He made sure that he did not dirty any place. It was a great learning experience for us humans. How could an injured, young dog understand his own responsibility? What made him realise that he needed to stay clean? From where did he summon the reserves of mental and physical strength to go through life each day? Possibly he lived every moment in the best possible way.

Bantu became stronger with each passing day. Within a month, his plaster was removed. Now he could stand on all fours. However, it was then that we noticed a major issue. His fractured legs were not aligned properly.

Bantu, the beautiful, naughty, good-natured young puppy was now a shaggy dog with crooked legs. He walked with a limp. Whereas he was the fastest, could jump the highest, guarded the hostels fiercely before the accident, now he was an odd-looking creature. One felt sorry for him.

However, I noticed something that set me thinking. All the dogs treated Bantu with the same respect and love as before. Nobody made fun of his crooked legs. His physical disability was not an issue with anyone. Maybe he was different. Maybe he was not the same old Bantu as they had known but Bantu got the same love, dignity and respect as he always had.

How do we humans treat our own? Do we treat our own Bantu’s with the dignity they so richly deserve? None of us is perfect. Since they are only human, they may have their own unique flaws. I urge all of you to drop your small ego’s and learn from the dogs. It’s a dog’s life really.

(The Plenum School set amongst a deep jungle of Himachal Pradesh is a treasure trove of creatures, birds, and wildlife. )

Still struggling to find the best boarding school for your child?